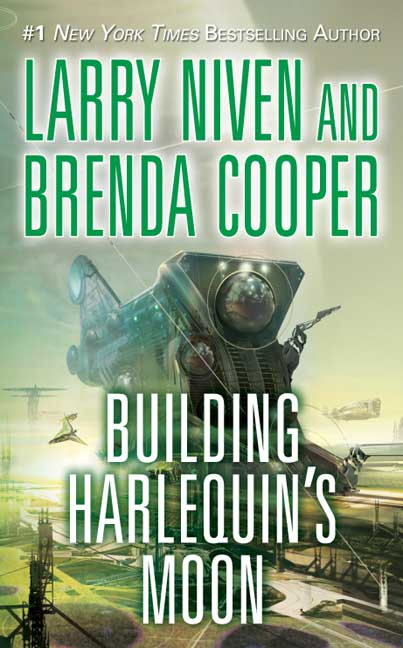 The first interstellar starship, John Glenn, fled a Solar System populated by rogue AIs and machine/human hybrids, threatened by too much nanotechnology, and rife with political dangers. The John Glenn’s crew intended to terraform the nearly pristine planet Ymir, in hopes of creating a utopian society that would limit intelligent technology.
But by some miscalculation they have landed in another solar system and must shape the gas giant planet Harlequin’s moon, Selene, into a new, temporary home. Their only hope of ever reaching Ymir is to rebuild their store of antimatter by terraforming the moon.
Gabriel, the head terraformer, must lead this nearly impossible task, with all the wrong materials: the wrong ships and tools, and too few resources. His primary tools are the uneducated and nearly-illiterate children of the original colonists, born and bred to build Harlequin’s moon into an antimatter factory.
Rachel Vanowen is one of these children. Basically a slave girl, she must do whatever the terraforming Council tells her. She knows that Council monitors her actions from a circling vessel above Selene’s atmosphere, and is responsible for everything Rachel and her people know, as well as all the skills, food, and knowledge they have ever received. With no concept of the future and a life defined with duty, how will the children of Selene ever survive once the Council is through terraforming and have abandoned Selene for its ultimate goal of Ymir?

Niven and Cooper have crafted a multi-generational, star-spanning epic, with intriguing, fast-paced action. Against a backdrop of mind-boggling technology, the authors ask important questions about how far science should go, and its impact on social structures and human rights. Niven and Cooper are playing God on a grand scale.

Larry Niven and Brenda Cooper colonization novel is a hugely ambitious, meticulously rendered feast for both head and heart. I can’t wait to see what they do next!

Larry Niven and Brenda Cooper have accomplished that most difficult of tasks, a novel full of real, hard science, but character-driven from the first page. The scope is enormous, but the focus is intimate, with characters who live and breathe. A marvelous read!

Building Harlequin’s Moon is a big tale, well told. Wonderful world-building and characters you can care about.