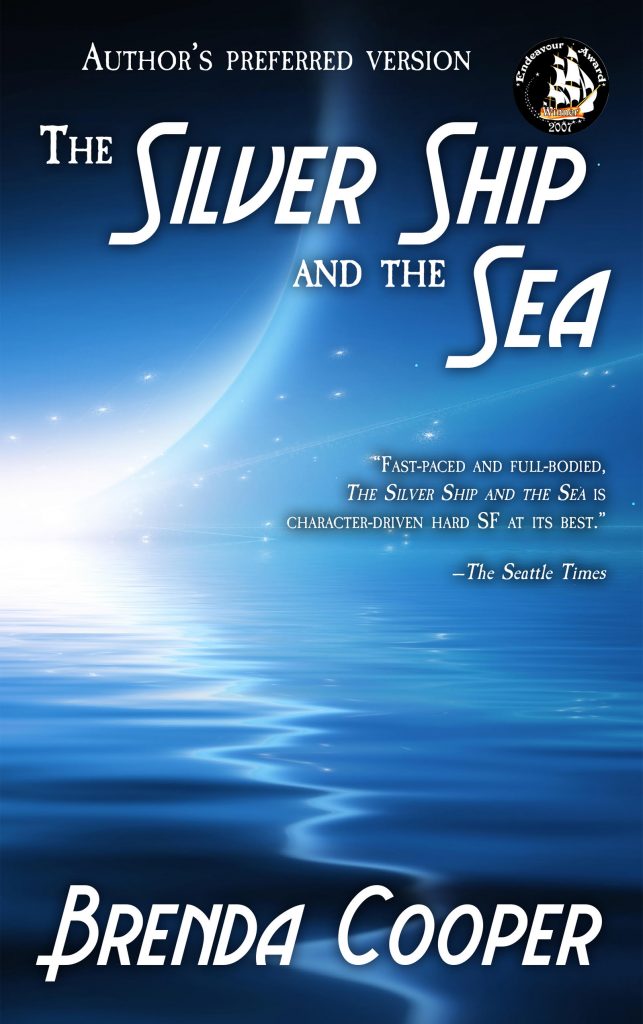 The Silver Ship and the Sea

The colony planet Fremont is joyous, riotous, and very wild.  Its grasses can cut your arms and legs to ribbons, the rinds of its precious fruit can skewer your thumbs, and some of the predators are bigger than humans.  Meteors fall from the sky and volcanoes erupt.  Fremont is verdant, rich, beautiful, and dangerous.
Fremont’s single town, Artistos, perches on a cliff below rugged mountains.  Below Artistos lie the Grass Plains, which lead down to the sea.  And in the middle of the Grass Plains, a single silver spaceship lies quiet and motionless.  The seasons do not dull it, nor do the winds scratch it—and the fearful citizens of Artistos won’t go near it.
Chelo Lee, her brother Joseph, and four other young children have been abandoned on the colony planet. Unfortunate events have left them orphaned in a human colony that abhors genetic engineering–and these six young people are genetically enhanced.
With no one to turn to, Chelo and the others must now learn how to use their distinct skills to make this unwelcome planet home, or find a way off it. They have few tools–an old crazy woman who wonders the edges of town, spouting out cryptic messages; their appreciation and affection for each other; a good dose of curiosity; and that abandoned silver space ship that sits locked and alone in the middle of the vast grass plain …

Combines the feel of classic SF adventure with strong, character-driven storytelling and lays the foundation for other tales set in her brave new world.

Distinctive characterizations, well-limned interrelationships, and the vividly realized Fremont contribute to an exciting coming-of-age story with a strong message about the evils of prejudice. . . YAs are sure to relate to the travails and exploits of these extraordinary young people.

Good plot, with some nice touches…Characterizations were particularly well done.